Washington: When Joe Biden and Kamala Harris made their first appearance together as Democratic running mates this week, it was a historic moment at a humdrum location – a school hall a short drive from Biden's home in Wilmington, Delaware.

A thunderstorm was battering the city and just as the candidates were due to appear the power went out at the school, delaying the event for an hour. When Biden and Harris emerged, both wearing masks, it was to a largely empty room rather than the crowd of cheering supporters one would expect for such an occasion. Lines in their speeches that would have generated loud applause were greeted by silence. While seeking to project a sense of closeness, the candidates and their spouses remained socially distanced. 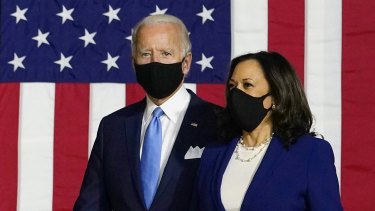 Joe Biden and running mate Kamala Harris have made a point of wearing masks at their joint events.Credit:AP

The event was a vivid demonstration of how this unprecedented moment in US history – an election campaign colliding with a still-raging pandemic – has upended the rules of political campaigning. Yet, despite its low-key nature, Democrats were delighted by how it went.

Biden, whose public speaking style can be famously meandering, gave a crisp speech introducing his running mate. Harris showed why Biden picked the 55-year-old former prosecutor as his deputy by delivering several cut-through lines against her Republican opponents.

"The case against Donald Trump and Mike Pence is open and shut," Harris said.

"This virus has impacted almost every country, but there’s a reason why it hit America worse than any other advanced nation. It’s because of Trump’s failure to take it seriously.

"He inherited the longest economic expansion in history from Barack Obama and Joe Biden. And then, like everything else he inherited, he ran it straight into the ground."

Biden’s announcement of his vice-presidential pick was a breakthrough moment in a campaign that has so far been drowned out by the pandemic, mass unemployment and the Black Lives Matter protests.

Vice-presidential candidates rarely lead to huge swings in the polls, but they can boost enthusiasm among the party base. On this score, Harris — the first black and first Asian-American woman to appear on the ballot in US history — has been a big success so far.

A Morning Consult poll released on Thursday (Friday AEST) showed that Democrats were overwhelmingly pleased with Biden’s selection: 88 per cent said the choice made them hopeful and four in five said it made them confident, proud, happy or excited. Democrats, it seems, share Barack Obama's reaction: "Joe Biden nailed this decision."

Even more importantly, party loyalists demonstrated their approval by opening their wallets. In the 24 hours following the announcement, the Biden campaign raised $US26 million ($36 million) — more than twice its previous record. This cash will allow Democrats to compete on the airwaves in battleground states against the well-funded Trump campaign.

Meanwhile, Trump and his Republican allies have struggled to find a clear line of attack on the California senator. Given Harris has one of the most left-wing voting records in Congress — and was a one-time supporter of Bernie Sanders' Medicare-for-all proposal — there is material for them to work with. But they haven't settled on a coherent strategy.

Referring to her tough performances during Senate hearings and the Democratic debates, Trump described Harris as "nasty" and "disrespectful". By the end of the week he was calling her "a mad woman", "angry" and "condescending".

The Republican National Committee (RNC) initially said that Harris' appointment showed that "the left-wing mob is controlling Biden’s candidacy, just like they would control him as president". Hours later, the RNC said the Democrats' progressive base was in revolt because Harris was not sufficiently left-wing. 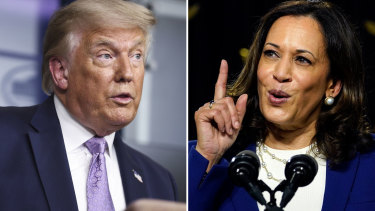 US President Donald Trump and other Republicans have been inconsistent in their attacks on Democratic vice-presidential hopeful Kamala Harris.Credit:AP

"You can tell it's a good choice because the Republicans are flummoxed," University of Virginia politics professor and election forecaster Larry Sabato says. "She has been the favourite for months, but when the announcement came they didn't know what to say. They've been contradicting each other. 'She's soft on crime – no, she's too tough on crime.' Well, which is it?"

"What they are about to do is create such a backlash of support for Kamala," Jones said on CNN. "Because once you go down the 'angry black woman' thing … you're creating a wave of sympathy and empathy and solidarity for her."

The election campaign will step up another gear next week with the Democratic National Convention, Biden's official coronation as the party's nominee.

When the Democratic Party announced in March that it would hold its convention in Milwaukee, it was a triumph for the residents of Wisconsin’s biggest city.

"We are seen as a sleepy city, we're often overlooked," says Patrick Guarasci, a Democratic strategist who lives in Milwaukee. "People here were very pumped up about the convention, even if they weren't Democrats. We had competed with the big boys — Miami and Houston — and we'd won. People had pride in that."

In 2016 Hillary Clinton was so convinced she would win Wisconsin that she never set foot in the state during the campaign and barely spent any money advertising there. She became the first Democratic nominee to lose the state since 1984. 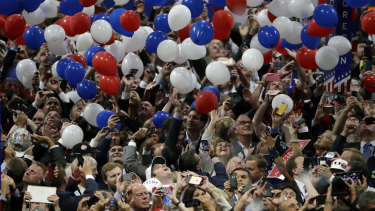 Both Republicans and Democrats have scrapped plans to hold traditional conventions.Credit:AP

By choosing Milwaukee to host the convention, the Democratic Party was trying to send a message to Wisconsinites that they would not take their votes for granted this time around.

Then the pandemic hit. First the Democrats delayed the date of the convention by a month. Then they made it a largely virtual event. Last week Biden announced that he would not even travel to Milwaukee to deliver his acceptance speech: instead he will accept his nomination from home in Delaware.

Guarasci says people in Milwaukee are disappointed but they understand the decision: "We don't want people to die so that people can give speeches here."

The shift towards a virtual convention has presented a challenge to Democrats: how to create a compelling television event without relying on the usual spectacle of balloons falling from the rafters of a packed arena.

With the televised component of the convention running for just two hours a night, speakers have been told to keep their speeches shorter than normal. And they have been asked to come up with an innovative backdrop for their presentation, rather than bookshelves or a brick wall.

Among those scheduled to speak are Bernie Sanders and Michelle Obama on night one, Bill Clinton on night two, Hillary Clinton and Barack Obama on night three and Biden on the final night.

The Republicans have had their own convention woes. Their event was originally supposed to be held in Charlotte, North Carolina. But when the state's Democratic governor declined to guarantee that he would permit a packed arena, Trump shifted it to Jacksonville, Florida. Then COVID-19 cases surged in that state, forcing Trump to cancel plans for an in-person event. The President is now weighing up whether to deliver his August 27 nomination acceptance speech from the White House or Gettysburg, the Civil War site in Pennsylvania.

Sabato believes the pared-back campaign is working in Biden's favour, given he currently leads by an average of eight points in the polls.

"Most people have made up their minds about Trump and they're going to have less opportunity to see something that is going to cause them to change their mind," he says.

But he adds a caveat: "We still have a long way to go. Biden is leading right now because his name is not Trump. People actually have to agree they want him to be president before this thing is over."