‘I was so near to departing this planet’: Author Michael Rosen, 74, reveals he was just hours from death after being rushed to A&E with coronavirus

Michael Rosen has revealed the extent of his battle with coronavirus, as the deadly virus left him hours from death when he was rushed to A&E.

The award-winning poet and author, 74, spent almost seven weeks in an induced coma on a ventilator after falling ill in March.

He told the Today programme: ‘I thought I was coping with a flu… or that it was the coronavirus and I was going to be one of those people who experience it as a kind of flu.’

But things started ‘moving very, very quickly’ when a neighbour, who is a GP, did an ‘oxygen saturation test… and suddenly it was, ‘You’ve got to go to A&E now’.’ 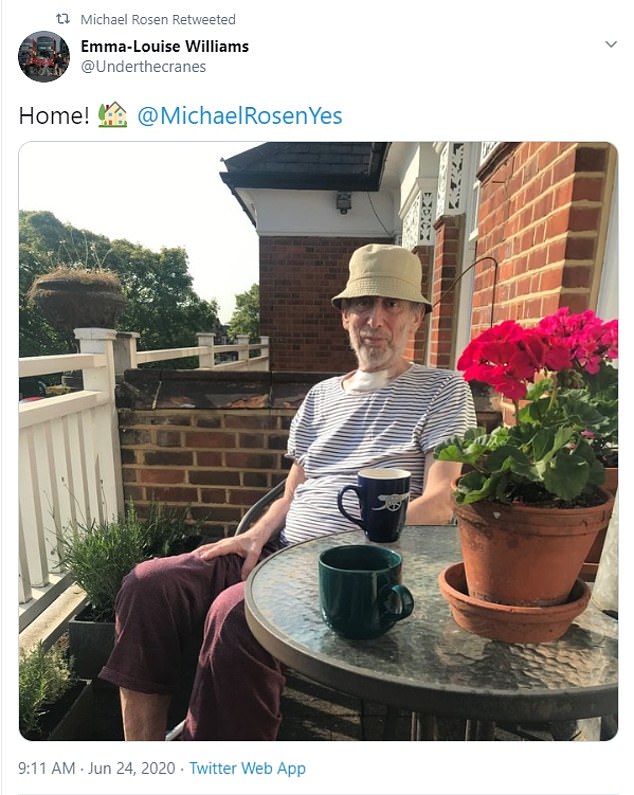 Michael Rosen’s wife, Emma-Louise Williams, shared a picture of the author on Twitter as he returned home for the first time following his battle with the illness

Describing the experience of being ‘rushed’ to A&E, he added: ‘I don’t think I sensed, at that moment, that I was probably two or three hours off departing this planet.

‘My respiratory system was conking out but so were my liver and kidneys and I didn’t know that but found out afterwards.’

Asked how he is now, the former Children’s Laureate told the Radio 4 programme: ‘The first word I think of to describe myself is feeble. My legs feel very, very feeble.

‘I think of them as cardboard tubes full of porridge. When I ask them to do things they don’t do it. I’ve learnt how to walk with a stick and a bit without a stick.

‘I can hear that my voice is a bit feeble as well and then I get tired very quickly. I’ve also lost some sight from my left eye and (hearing) from my left ear. So I feel a bit lopsided. Feeble and lopsided.’

The children’s author, whose books include We’re Going On A Bear Hunt, Little Rabbit Foo Foo and Chocolate Cake, has now returned from hospital and said being on a ‘knife edge’ had changed him as a person.

‘I was so near to going…. It’s a reminder of how life is very impermanent,’ he said.

‘I get these, not exactly nightmares, but recurring images… and I don’t really want them there but I can’t get rid of them.’

‘I didn’t know about the seven weeks being in this induced coma until I came home and (his wife) Emma told me about it… I got quite upset about it…. That’s full of emotion for me, that people were just hanging in there.’

Rosen will not be writing about the experience just yet, saying: ‘I usually allow these more traumatic things to sit about for a bit.’

His wife, Emma-Louise Williams, shared a picture of Mr Rosen at home, before praising staff at Whittington Hospital, Kanitz Critical Care Unit and St Pancras Hospital, all in London, for their help.

In a post on Twitter Mr Rosen said: ‘Now I’m home Emma-Louise has been through the timeline of what happened to me. 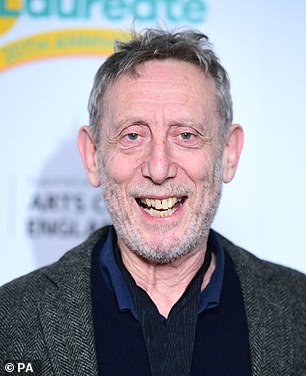 Mr Rosen, who served as Children’s Laureate between 2007 and 2009, began charting his battle with Covid-19 in March

‘I become overwhelmed by how she and the family hung on in hope while I was out of it in a coma for several weeks – survival in doubt. I’m so lucky to have had such hope and support backing me.’

In follow-up Tweet, he added: ‘Teams of people in their crews: nurses, doctors, cleaners, caterers, ambulance drivers, physios (and more) made huge efforts to keep me alive – along with many others at the same time.

He also thanked all of the well-wishers who had sent him messages of support during his hospital battle.

Mr Rosen, who served as Children’s Laureate between 2007 and 2009, began charting his battle with Covid-19 in March.

He wrote about ‘freezing cold sweats and deep muscle exhaustion’.

He made jokes about his walking stick, which he named ‘Sticky McStickstick’, saying: ‘Just as I was beginning to love my stick, Sticky McStickstick, I’m told, ‘You mustn’t become totally stick-reliant.’ Oh noooooooo!!!’

Mr Rosen later followed it up by saying his tweet was ‘not a dig at physios’, who he later described as ‘the best’.