In a flap: Pet emu runs around in circles as he tries to play with a garden hose

This is the cute moment a pet emu tries to play with running water from a garden hose.

Kevin the four-month-old emu from Ontario, Canada, loves to play with water and made an amusing game out of it.

In adorable footage from October 4, Kevin can be seen running up to a hosepipe on the grass at home in West Lorne.

Kevin’s owners Jenny and Kyle Moyse were raining the pool for winter and harvesting their garden in what was described as ‘a typical weekend’.

Kevin is cheered on as he stands near the running water before jumping back and playfully running around in circles.

Kevin was a 33rd birthday present to Kyle from Jenny, when the bird was just a chick. 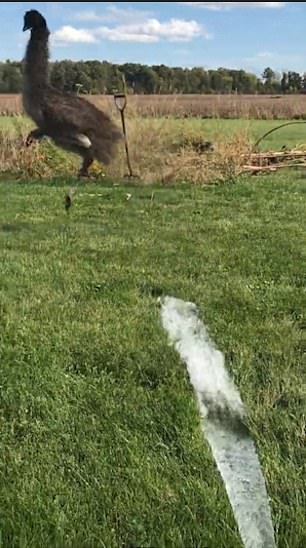 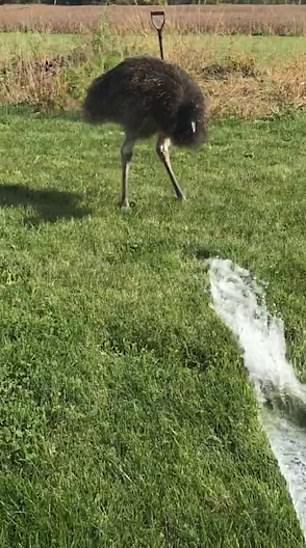 Pet emu Kevin, four months, was trying to play with a garden hose on owners Jenny and Kyle Moyse’s farm on October 4

Kevin enjoys helping around the couple’s 100-acre farm, playing with their children and also loves water.

In the clip, Kevin only sits down for a moment before he jumps back up and enthusiastically runs around again.

Emus are sometimes seen in ponds or lakes and are good swimmers. They typically live in grasslands, savannas, and forests and prefer areas with access to standing water.

They are a flightless bird with small wings, but their long, powerful legs allow them to run around 30 miles an hour.