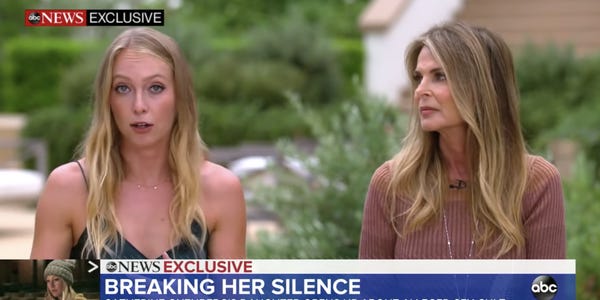 Former NXIVM member India Oxenberg spoke publicly about the cult for the first time this week, saying she was groomed and raped by leader Keith Raniere.

India Oxenberg, 29, and mother, "Dynasty" actor Catherine Oxenberg, sat down to discuss NXIVM on ABC's "Good Morning America" on Tuesday, in a promotional interview for the Starz docuseries, "Seduced: Inside the NXIVM Cult."

"It was a trap," India Oxenberg said of NXIVM. "And it was a ploy for Keith to enslave women for his own sexual desires."

The mother-daughter duo went to their first NXIVM meeting together nearly a decade ago when it was operating as a purported self-help program based in Albany, New York.

In the years since, a secret sex cult within the group surfaced called DOS, in which women were forced to have sex with Raniere. Raniere was found guilty last year on charges of racketeering, sex, trafficking, and possession of child pornography.

India Oxenberg called Raniere a "master of manipulation" and a "predator," and said she was groomed by the "inhumane" NXIVM leadership.

"When you're unaware, it's so easy to be led astray, especially by people who are masters at manipulation," she told GMA, adding that she paid the organization $100,000 during her time as a member.

India Oxenberg said that "Smallville" actress Allison Mack, who pleaded guilty to racketeering charges, recruited her for DOS, saying she was forced to hand over nude photos as collateral, which removed any free will within the group.

"I had given collateral, which automatically removes my choice," India Oxenberg told GMA. "So I did not have the option to say no. Saying no meant hurting my family or hurting my friends. And I wasn't gonna do that."

She also said her relationship with her mother was severed by the group early on, but Catherine Oxenberg spent years working to free her daughter.

"You don't have to live with Keith Raniere haunting you. You can reclaim your life," she said. "You can learn from it. And you can move on. And you can heal. And you can have love. And I just feel so lucky that I can have that."