The number of whales stranded off the coast of Tasmania is now believed to be about 470, after an extra 200 animals were found in an aerial operation on Wednesday morning.

Tasmanian wildlife authorities believe very few of the additional 200 whales are alive. However, rescuers remain optimistic more of the mammals at the initial site, which was discovered on Monday, can be saved this week with euthanasia being considered only as a last resort. 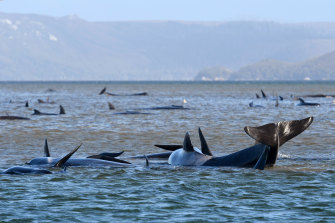 The stranded animals are understood to be pilot whales, a species that can weigh up to three tonnes.Credit:AP

Nic Deka, north-west regional manager for Tasmania's Parks and Wildlife Service, said the other whales were found south of the current operation area in Macquarie Harbour, near the seaside town of Strahan.

"They were in a couple of bays, probably five or 10 kilometres from the area we have been working in," he said.

He said there would be a "more extensive search" of the coastline after finding the extra group of whales, although it is not believed the team would find more.

"If they can be saved we probably will send crews over there to do that."

Wildlife biologist Dr Kris Carlyon said the additional whales were probably part of the same group travelling in the ocean.

The whales were found through an infrared mapping operation, conducted by helicopter, to determine how many were still alive.

Mr Deka said the mapping would be available later on Wednesday morning as crews worked to tag and release whales at the initial site.

"Our focus is on those animals that are still alive and still in a condition to be got off the bar and taken to deeper waters," he said, adding that "hopefully the number of whales who have been successfully rescued will increase".

On Tuesday, it was reported that a third of the initial 270 whales were believed to be dead.

On Wednesday, the third day of their stranding, Mr Deka said "the mortality has increased, that's inevitable, but there are still a significant number that are still alive and we will continue to work with those".

He said it was a "disappointment" to find a "small number" of whales released yesterday had returned to the sand and stranded again, although these were a minority and 25 whales were freed on Wednesday.

"The good news is that the majority of the whales who were rescued are now out in deep water and swimming, so we have been successful," he said.

Overcast skies and light rain have created perfect conditions for rescuing the whales, keeping them wet while crews work.

The stranding is now the largest ever seen in Tasmania, Dr Carlyon said.

Mr Deka said Parks and Wildlife Services were working with the Environmental Protection Authority to determine what would be done with the dead whales, which are estimated to number nearly 300.

"We have a couple of options we are considering, but we need to consider all aspects … the one thing we do know is we can't really leave the whales in the harbour," he said.

Speaking on Tuesday, Macquarie University whale researcher Dr Vanessa Pirotta said the one upside of the "terrible" event would be sample collection from the dead animals for study.

Get our Morning & Evening Edition newsletters

Most Viewed in National