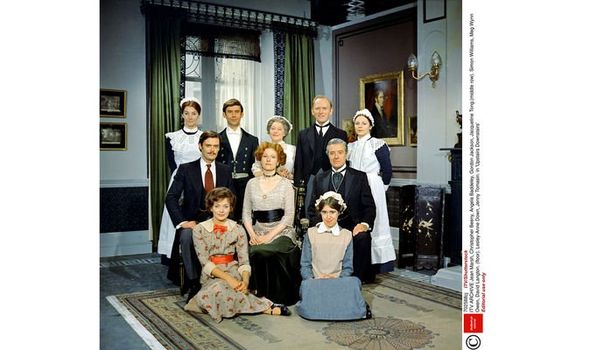 “I’m sitting on the floor to the left in this promotional photo for Upstairs, Downstairs, the ITV drama series depicting the fictional lives of the Bellamy family and their servants between 1903 and 1930.

It had been on the air for two years before I started in it as Georgina Worsley in 1973, and I was a big fan who never missed an episode. Joining that wonderful cast was one of the most exciting things that has ever happened to me. Before I went on for my first scene, with Gordon Jackson [who played the key role of Hudson the butler] opening the front door to me, I was so nervous I couldn’t breathe. He put his arm around me and said, ‘Are you nervous, my sweetheart?’ And I said, ‘Yesss.’ He replied, ‘Don’t worry, it gets worse.’ 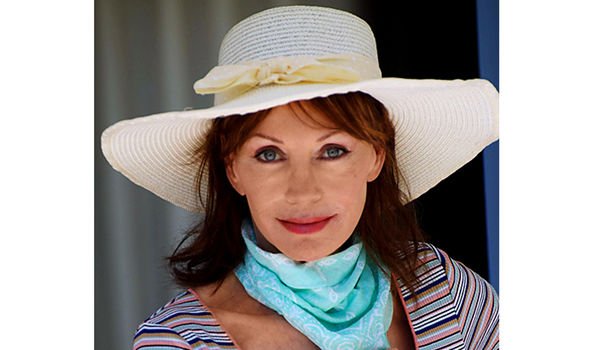 Born and raised in south-west London, I started off as a child model aged 10 and was appearing in movies from 12.
At 19, I’d just been in America making Scalawag with Kirk Douglas when I started in Upstairs, Downstairs and my earnings went down significantly.  I was living in a very nice flat in Shepherd’s Bush with actor/writer Bruce Robinson, and he wasn’t earning any money to speak of so I was the breadwinner. A friend of my uncle kindly helped get us a flat in one of the Peabody Estates and I had to scrub the steps. There I was playing an upper-class woman on TV and then every fortnight
I had to go out and scrub the cement steps outside the block of flats.

In the final episode in 1975, Georgina married Lord Stockbridge (played by Anthony Andrews). We were driving away in a Rolls-Royce when the writers got into the car saying they wanted to do a spin-off with the Stockbridges buying 165 Eaton Place and moving in. I didn’t see it working without the major people who’d been in it from the beginning, so I declined.

I went back to making movies, including The Pink Panther Strikes Again with Peter Sellers, A Little Night Music with Elizabeth Taylor, The Betsy with Laurence Olivier, The First Great Train Robbery
with Sean Connery, Hanover Street with Harrison Ford, Rough Cut with David Niven and The Hunchback Of Notre Dame with Anthony Hopkins.

I probably got on best with fellow Brits. I find British actors to be very normal. I was certainly in awe at the thought of working with Laurence Olivier, but from the moment I met him in an elevator when we both arrived late for the cast read-through
in California it was easy.

I settled in California in 1981, and since 1997 have lived in my current home in Malibu with my [third] husband Don FauntLeRoy and our son George. Don is a director and cinematographer. We met when we both worked on US miniseries North And South in 1985 and married a year later.

I have played a couple of perfectly written characters in my career – Madeline in North And South, and Georgina in Upstairs, Downstairs. From the latter, I’m still in contact with Simon Williams who played James Bellamy (sitting behind me in this photo) and Jacqueline Tong who was Daisy (standing at the back on the right). I’m glad Upstairs, Downstairs was remade in 2010/12, I just don’t think it was done correctly. It seemed to be short on characters. People compared Downton Abbey to Upstairs, Downstairs. It was similar in that it was about rich people and the people who did their dishes for them, but otherwise it was very different.

I’ve no plans to live in England again. I only really have my sister, Angela, there, and she comes and visits me here often.

Around the time I turned 60 in 2014, I retired from acting. But since then Don has persuaded me to appear in a few of his films, most recently Gates Of Darkness. The only person I would leave the house to work for now is my husband.”