The police union building in Portland, Oregon, was set on fire Saturday night, leading police to declare a riot and order the area cleared. Federal authorities left the city at the end of July after weeks of violent clashes between them and protesters, and local leaders have hoped for calm after the federal agents withdrew.

Police said there were several protests on Saturday that were peaceful, but a small group lit a fire at the Portland Police Association (PPA) building. According to The Oregonian, it’s the second time a fire has been lit at the police union building, a regular site of protests since they began in late May.

According to police, the group was warned around 10:30 p.m. to “not engage in criminal activities” and disperse. “People within the crowd committed crimes when they erected a fence, pushed dumpsters into the street to block traffic, set a dumpster on fire, vandalized the PPA office with spray paint, and destroyed security cameras,” police said in a release.

At 11:35 p.m., people within the crowd broke the window of the police union offices, entered the building and then lit a fire, “committing the crimes of criminal mischief, burglary, and attempted arson,” police said. A riot was then declared and all people assembled were ordered to leave, including members of the media and legal observers.

Officers from the Oregon State Police and the Portland police tried to break up the crowd. But three officers were injured as police said the crowd started throwing bottles and paint balloons, as well as shining green laser lights, which is a crime in Oregon. 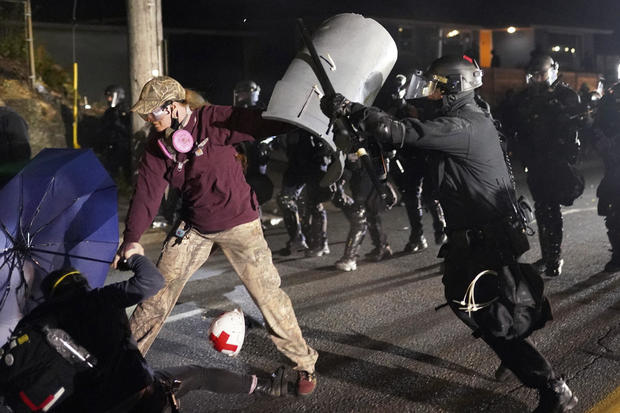 Police said that they were then able to get around the barricade that had been created and pushed the crowd back. Police estimated there were about 300 people in the crowd at that point.

Just after 1 a.m., police declared Kenton Park closed and their presence was considered “riotous.” The crowd dispersed by about 2 a.m., police said.

Protests have been taking place in Portland for over 70 days and nights, beginning after George Floyd’s death in Minneapolis at the end of May. Federal authorities arrived at the beginning of July under an executive order from President Trump, leading to violent clashes. State and local officials pleaded for the federal authorities — who came from a number of different agencies, including the Department of Homeland Security — to leave as the confrontations intensified.

Despite Mr. Trump’s insistence that federal authorities were doing a “fantastic job,” the Trump administration and Oregon Governor Kate Brown worked out a deal for the federal agents to begin withdrawing at the end of July. But acting Department of Homeland Security director Chad Wolf said the timing of their departure depended on local authorities ability to secure the city.

Eyewitness accounts and video shared to social media often showed federal agents using force on protesters who did not appear to be acting violently, including moms and veterans. Paul Rosenzweig, who served in the Department of Homeland Security under Republican President George W. Bush, described the actions of federal agents in Portland as “on the borderlines of legal.”

“Never have I seen it before where the federal government has imposed its will on the state and says, ‘We’re going to do this mission whether you want us here or not,'” Rosenzweig told CBS News’ David Martin.

On Thursday, Wolf defended his department personnel’s actions when he testified before the Senate Homeland Security and Governmental Affairs Committee. “Our law enforcement officers are not the Gestapo, storm troopers or thugs,” he said.

Authorities have been trying to distinguish between peaceful protests during the day and sometimes violent clashes at night.

DJ i_o Dead at 30, Months After Tweeting ‘I Haven’t Been OK for a While’