It's too easy to miss brilliant streaming shows, movies and documentaries. Here are the ones to hit play on or skip.

What makes a monster, and do they know what they are? That's the underlying query, teased with vivid style and luscious suggestion, in Ratched, the new limited series from the prolific imprint of television auteur Ryan Murphy. A twisted origin story for the controlling head nurse who serves as the villain in Ken Kesey's 1962 novel One Flew Over the Cuckoo's Nest and the subsequent 1975 Milos Forman film adaptation, Ratched is a twisty psychological thriller where respectable veneers invariably shatter. 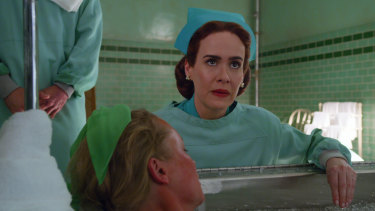 After the (in) cold (blood) open of a killer launching a bloody rampage through a home for Catholic priests, the 1947-set story alights upon Mildred Ratched (Sarah Paulson), who arrives at the Californian coastal town of Lucia and its psychiatric hospital. Using a formidable front and false means, she faces off with the head nurse, Betsy Bucket (Judy Davis), and impresses the facility's head, Dr Hanover (Jon Jon Briones), securing a job as a nurse even as her machinations and flashbacks suggest that her identity is false and her trauma all too real.

Mildred's infiltration is connected to the arrival of 'The Clergy Killer', Edmund Tolleson (Finn Wittrock) for psychiatric evaluation before his death penalty trial. Her fascination soon has an explanation, even as the plot intermingles Hanover's experiments – he has high hopes for the lobotomy – and the Californian governor's canny secretary, Gwendolyn Briggs (Cynthia Nixon), whose promotional aims for the hospital soon include an interest in Mildred. The mood is ice cold or semi-hysterical, with terrible crimes applied as cures.

Ratched was created by Evan Romansky and engineered by Murphy, who secured the complex rights, served as producer and directed the first episode, where the portentous crane shots, saturated colour palette, and Bernard Herrmann-like score set an enduring tone. It reflects his interest in how history is a straitjacket that needs to be loosened, with Paulson, who he often casts, perfectly poised between Mildred's mission and her own redemption.

The show is Murphy's third for Netflix after signing a mammoth exclusive deal, and it feels more connected to his earlier works, particularly certain seasons of American Horror Story, than The Politician or Hollywood.

The hospital itself is supposedly a former spa, so its luxurious foyer and gleaming hallways – all the better for tracking shots – feel like a sidestep from reality, a blazing bright netherworld where the show's monsters deliver flinty dialogue and ice-pick surgery. It doesn't feel that new, but Ratched's monsters make their mark.

Des begins with the 1983 arrest of Dennis Nilsen, who upon being asked about the human remains in his London apartment's drains dispassionately shows police the body of a murder victim in the cupboard and confesses to more than a dozen killings.

Asked why, he replies, "I was rather hoping that you could tell me that."

This three-part series is about the banality of evil: Nilsen is matter of fact in describing his murders (which are not depicted), and apologetic for not being able to name his victims, who were often homeless men lured by the promise of food or alcohol.

The lack of malice or extraneous emotion only adds to the nightmarish burden placed on the pair who dealt closely with Nilsen: Detective Chief Inspector Peter Jay (Daniel Mays) and biographer Brian Masters (James Watkins).

The former struggled to identify victims, the latter to explain Nilsen's killing spree, and by examining their stoic efforts to apply order and clarity to the inexplicable Nilsen's crimes are more than just true crime provocations. They're a boundary we can't cross.

Made with wonderfully tactile puppets, this production from the Jim Henson Company is a talk show with a difference. Sent to conquer the Earth, alien Ned (voiced by Paul Rugg) falls in love with our pop culture and instead decides to beam celebrities to his ship's couch to further the lineage of Carson, Letterman and Sanders. A meta-commentary on chat shows and an improvised comedy, it's silly but smart viewing that plays on different levels for different ages. Guests include Andy Richter, Bindi and Robert Irwin, and Star Wars scene stealer BB-8.

You'll see this offering from motorbike trek pals actor Ewan McGregor and presenter Charley Boorman as either the welcome return of a cheerful distraction or the unnecessary reminder of celebrity privilege. I lean to the former, as the pair are genuinely engaging, and this handsomely shot encore finds them travelling 21,000 kilometres through South and Central America to Los Angeles. One notable change: their road bikes are electric, so prepare for some charging station anxiety.

Here's one for science-fiction fans. SBS on Demand has just added all four seasons of this underappreciated reboot of the 1995 Terry Gilliam movie about an explorer from a post-apocalyptic future flung back in time to prevent the release of a deadly virus. Time travel is inexact, as are the clues available to James Cole (Aaron Stanford), and that off-balance impetus motivates a story that alternates between 2015 and 2043. Fans of character actor Tom Noonan will enjoy his turn as 'The Pallid Man'.

All In: The Fight for Democracy
Amazon Prime Video

Voter suppression is one of the many terms that's going to be referenced as a contentious US presidential election draws near, and this bracing documentary by Liz Garbus and Lisa Cortes provides both historical background and on-the-ground definition to the practice. Their guide is Stacy Abrams, a lawyer and activist who in 2018 lost the gubernatorial election in Georgia to a Republican candidate widely accused of preventing Black voters' access to a ballot. It's sobering viewing, especially with a policy rooted in the 19th century growing stronger in the 21st.

*Stan is owned by Nine, the owner of this masthead.

Most Viewed in Culture