They may be new parents, but Joe Jonas and Sophie Turner aren’t too busy to remember important dates. Joe Jonas and Sophie Turner celebrated their engagement anniversary on Instagram with the sweetest post, and OMG, I can’t with these two. On Oct. 15, Jonas took to his IG Stories to share a selfie, which shows him kissing Turner on the head while she shows off her sparkler. "Three years ago today @sophiet said yes!" he captioned the photo. Turner later reposted his Story along with three heart emojis. True love is not dead, y’all.

Three years earlier, on Oct. 15, 2017, the couple announced their engagement with matching Instagram posts, which showed only their hands and Turner’s sparkly new pear-cut diamond. "She said yes," Jonas captioned his picture, while Turner’s caption read, "I said yes." Though it wasn’t clear before when they actually got engaged, they apparently shared the exciting news the same day it happened. As Jonas explained to TV Week in April 2018, he and Turner wanted to break the engagement announcement before the tabloids could, which is why they posted about it so quickly. "We knew it would get out if she was walking around with the ring on her finger so we tried to be timely about it, but the emotions took over," he said. 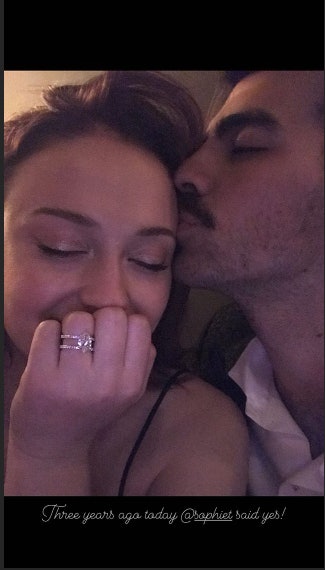 Since welcoming baby Willa in July 2020, Jonas and Turner seem more loved up than ever (which is really saying something). The couple has yet to share any pics of their new addition, but Turner did acknowledge their evolving relationship in her birthday Instagram for Jonas. "Happy birthday to my love/bub/baby daddy," she wrote alongside a black-and-white pic of her and her husband enjoying a (likely pre-coronavirus pandemic) date night. Cute alert!

A source for HollywoodLife reportedly claimed the couple’s bond is stronger than ever since welcoming their daughter. "Becoming parents has brought Joe and Sophie even closer," the source reportedly claimed. "They are both head-over-heels in love with their little girl, and Joe is in awe of how amazing his wife is. He feels like he really hit the jackpot because she’s handled everything so well — it’s like she was born to do this. The best part is that they are a team on everything, and they really make it all fun."

Happy third engagement anniversary to this power couple. I can’t wait to watch these two continue to thrive together.