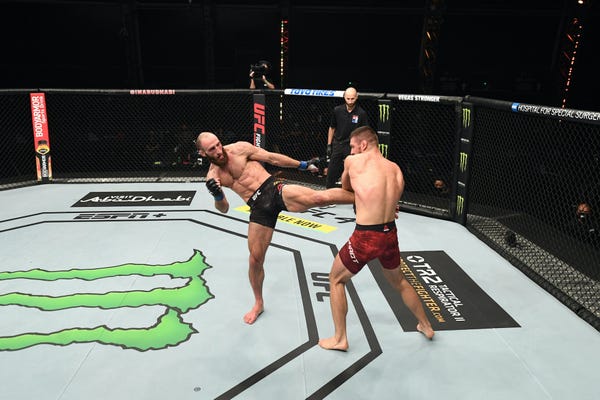 FIGHT ISLAND — Guram Kutateladze scored an upset victory over an unbeaten fighter but refused to accept the win, saying: "It wasn't my fight."

It was always going to be a tough assignment for Kutateladze, who headed into the Flash Forum on Fight Island which is a quarantined area on Yas Island in Abu Dhabi, having to compete against Mateusz Gamrot who was a two-weight champion for the Polish MMA firm KSW.

But Kutateladze, too, had a fine reputation because of an unbeaten run and a multi-dimensional mixed martial arts background.

On Saturday, the two fighters showed North American fight fans why they're so highly thought of in their home countries as it was not long before a competitive battle broke out, with Kutateladze edging the opening rounds.

Gamrot dominated takedowns, landing five of 16 attempts but Kutateladze's work from his back and in his scrambling moments seemed to bewilder the Polish fighter.

Gamrot also out-landed Kutateladze in every round, tallying 69 strikes landed out of 151 attempted which is significantly more than Kutateladze's haul of 43 from 93.

However, the Georgian had a clear edge in power and so his blows tended to do more damage than his opponent.

The fight was entertaining and full of thrills which is an impressive feat for a pair of UFC debutants and a split decision either way would have been a fair result.

Ultimately, Kutateladze got the win with scores of 29-28 (twice) and 28-29, yet he fumed at the result and appeared to say he should have lost.

"It's not my fight," he said after the announcement of his win. "It's number one bull-s—.

Regardless, Kutateladze advanced his pro MMA record to 12 wins (seven knockouts, four decisions, and one submission) against two losses, and inflicted the first loss on Gamrot's record.