THE stage is set for a stunning afternoon of racing at Ascot on Qipco British Champions Day.

There are five mouthwatering Group races and a red-hot handicap to get stuck into. We take a closer look with our race-by-race preview. 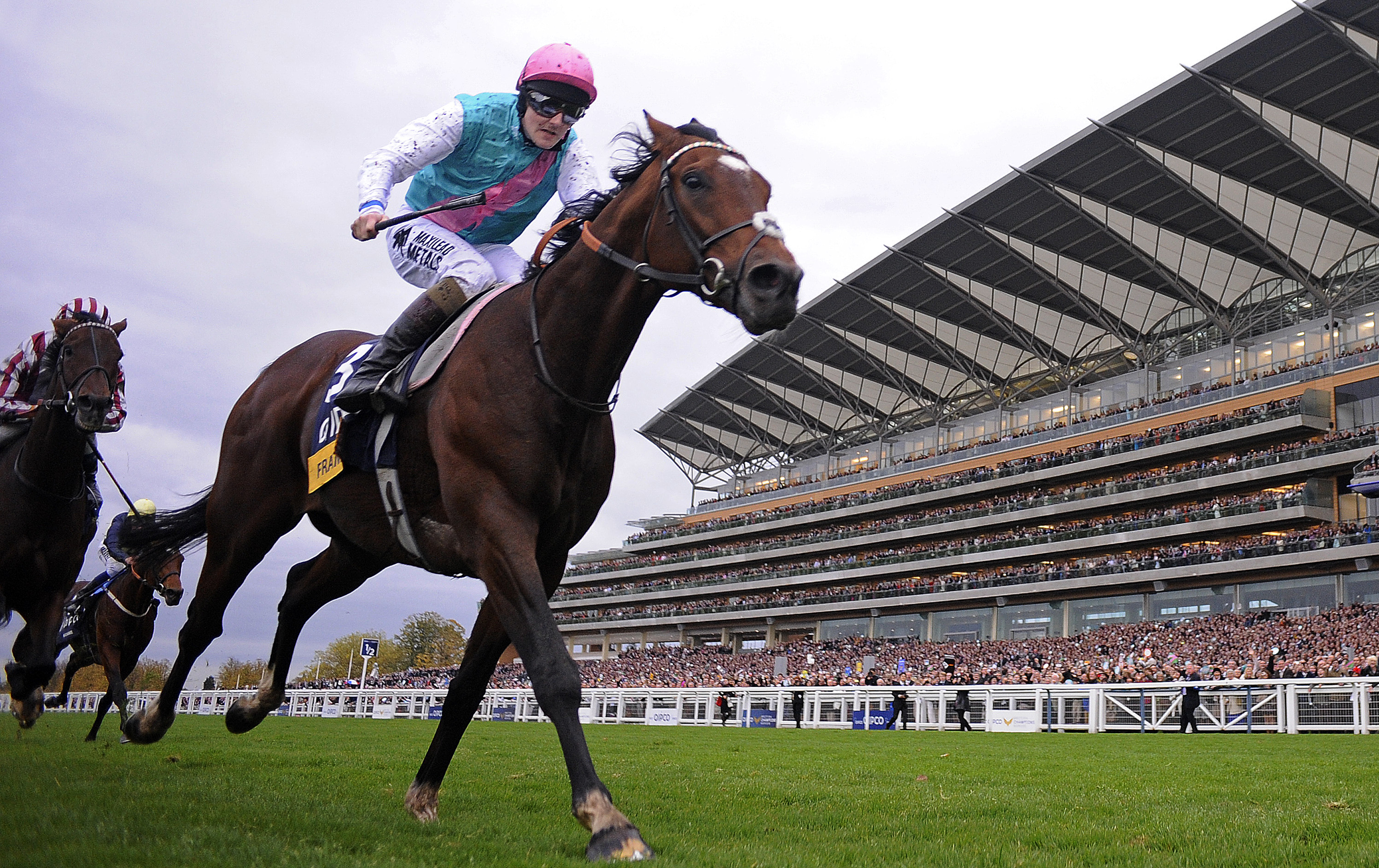 OFFER OF THE DAY

T&Cs: Min stake £10, min odds 2.0. Only deposits made using Credit/Debit Cards or ApplePay will qualify. Free bets are awarded after the qualifying bet has settled, valid for 30 days, must be used on multiples with 3+ legs. Max £50 in free bets. T&Cs apply. 18+ Begambleaware.org

STRADIVARIUS had to settle for second in this race 12 months ago, but he can end his campaign on a high this time around.

The dominant stayer of the last three seasons wasn't disgraced in a slowly-run Arc earlier this month, finishing midfield and virtually upsides his brilliant stablemate Enable.

Provided that race hasn't left a mark, he should win this for a second time.

He faces some fresh faces this time around, with the likes of Dawn Patrol and Sovereign representing Aidan O'Brien. The latter should appreciate this test of stamina.

Ballydoyle also run Broome, who was a place behind Stradvarius in the Coronation Cup on his only outing of the season. It will be fascinating to see how he gets on over this distance.

Spanish Mission, who won a weak edition of the Doncaster Cup last time, and Fujaira Prince hold solid place claims, but perhaps the biggest danger to the selection is Search For A Song.

She gets a bit of weight and is a strong stayer who arrives in top form having bagged her second Irish St Leger last month. Soft ground is an worry for her, however.

This race in particular has thrown up some strange results in recent years, with Librisa Breeze, Sands Of Mali and Donjuan Triumphant the last three winners.

Here's hoping for a punter-friendly renewal this time, as DREAM OF DREAMS looks to have plenty in his favour.

He has always had plenty of class, but he has been expertly handled by Sir Michael Stoute this year and is finally fulfilling his potential.

The six-year-old arrives with a convincing win on soft ground in the Sprint Cup under his belt and he has loads of strong C&D form to his name, having finished second in the Diamond Jubilee in the last two seasons.

He was disappointing in this 12 months ago, but he is in much better nick now and has been given a light campaign this summer. He will be as fresh as paint for the big day.

Oxted has been on the sidelines since winning the July Cup in ready fashion, but trainer Roger Teal reckons he is back to his best now.

Soft ground is the big unknown, and he has yet to race at Ascot, but both his parents loved the mud. He is a serious horse and commands respect.

Tremendous mare One Master won her third Foret 13 days ago and she was second in this race last term. She should be bang there again.

Glen Shiel and Art Power chased home Dream Of Dreams at Haydock and both remain on an upward curve. They have to enter calculations for each-way purposes.

This is a big step up for the unbeaten Starman, but he could be anything.

It isn't beyond the realms of possibility that Cape Byron, who returns from a year off, could play a part given his brilliant record at the track and his good record fresh.

WONDERFUL TONIGHT ran out a gutsy winner of the Prix de Royallieu at Longchamp on Arc weekend.

She was behind Dame Malliot and Laburnum in the Prix Vermeille the time before, but that was a muddling race and the ground was quicker than ideal.

She loves soft ground and stays all day, so I reckon she can turn the form around with those fillies and she is the most likely winner in my opinion.

But I'm also tempted to have a few quid each-way on Joseph O'Brien's THUNDERING NIGHTS.

The mud-loving three-year-old stayed on powerfully for a never-nearer third in the Blandford Stakes last time and she is bred to relish this step up in trip.

Even So was in a similar boat to Wonderful Tonight in the Vermeille and this looks a more suitable assignment.

Antonia De Vega arrives seeking a hat-trick, but she was put in her place in this race last year and she looks vulnerable again.

PALACE PIER has looked an absolute monster this season, both in terms of ability and physical appearance. He's a beast.

He is going to take the world of beating here, but his odds tell you as much and I'd rather have an each-way tickle on longshot ROSEMAN.

He was classy as a three-year-old last season, ending his campaign with a rout of a smart field on heavy ground at Newmarket (he stuffed Century Dream out of sight).

He showed up well in the Queen Anne back in June, finishing a fine fourth having travelled sweetly and been short of room until the final furlong and a half.

You can put a line through his flop in France, as the ground was much faster than the official description and he is a horse who needs cut.

He is still lightly-raced and he arrives nice and fresh. There is more to come.

The Revenant was an excellent second in this 12 months ago and returned from a year off the track to win well at Longchamp a fortnight ago. The possibility that she could bounce turned out so quickly is a niggling worry.

Nazeef is a winning machine and had something up her sleeve in the Sun Chariot. She can never be written off.

The admirable Circus Maximus started his campaign with two excellent performances, but he hasn't been at his best the last twice.

A mouthwatering race in prospect.

The brilliant Magical is back to defend her crown and she could hardly have had a better season.

She claimed the scalp of Ghaiyyath in the Irish Champion and she proved when winning this 12 months ago that she could get the job done on soft ground.

She faces a formidable rival in the form of Mishriff. John Gosden's colt was a ready winner of the French Derby back in July and blew his rivals away in a Deauville Group 2 last time.

He arrives nice and fresh and looks a potential top-notcher. This is his stiffest test to date, but he has done nothing but improve throughout the year.

That pair will no doubt prove popular among punters, but I reckon PYLEDRIVER is worth a punt.

William Muir's stable star has been a breath of fresh air this season and he lost nothing in defeat when third in the St Leger last month, just running out of petrol in the closing stages.

He isn't short of pace as he showed when leaving his rivals for dead in both the King Edward and Great Voltigeur, while his proven 1m4f stamina could come in handy if this becomes a test at the trip.

He hasn't got much to find with several of these on ratings and he appeals as the type who will keep improving with time and racing.

Of the remainder, Addeybb, second in this 12 months ago, looks sure to run his usual good race.

He warmed up for this with a Listed win at Ayr and this has been a long-term target. He has to be respected with conditions in his favour.

The Prince Of Wales's Stakes rather fell into Lord North's lap back in June, but he handles cut in the ground and he has to enter calculations.

Don't underestimate the French raider Skalleti, for whom the ground can't get deep enough.

As ever there are plenty in here with chances, and in market leader Raaeq we are dealing with a potential stakes horse.

He won pulling a cart over 7f at this track last time out and ground conditions hold no fears. He is 5lb well-in under a penalty so his chance is clear for all to see – for all this is a tougher test and he is up in trip.

Tempus is better than he showed when a beaten favourite in the Cambridgeshire. He is better judged on his impressive victory over C&D in September and a mark of 99 surely underestimates him.

King Ottokar hasn't scaled the heights once expected of him, but he ran much better than the bare result at Doncaster last time and he is a big threat to all off 2lb lower.

Irish challengers Keats and Njord are likely to play a part, particularly Jessie Harrington's runner who brings plenty of strong handicap form to the table.

Solid Stone, Ropey Guest and Hortzadar are all worth each-way consideration, particularly the latter who should get a strong gallop to attack and gets the perfect man for this C&D in Jamie Spencer.

But RIVER NYMPH is on a sharp upward curve and he can land this valuable pot.

He was well on top in the closing stages in a pair of 7f handicaps at this course and at Newbury, and the step up to 1m could unlock further improvement.

He was a well-backed favourite for the Challenge Cup here earlier in the month before the meeting was abandoned, and he looks to have slipped under the radar a little here.