Australia has secured a strong opening to its 2020 Emmy campaign, with cinematographer Greig Fraser winning an award in the cinematography for a single-camera, half-hour series category.

Fraser and New Zealand-born director of photography Baz Idoine won the award for their work on the critically-acclaimed Star Wars series The Mandalorian. 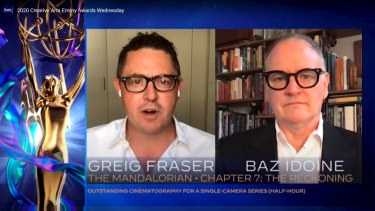 Greig Fraser and Baz Idoine making their acceptance speeches via video link at the 2020 Emmys.Credit:Academy of Television Arts and Sciences

The series, which airs on the Disney+ streaming platform, is set five years after the events of the film Return of the Jedi – the sixth chapter of the nine-film Star Wars saga – and follows the adventures of a Mandalorian gunslinger named Din Djarin. 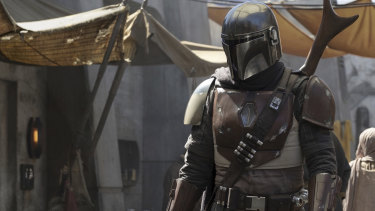 A scene from the Disney+ original series The Mandalorian.Credit:Lucasfilm

In 2017, Fraser was nominated for an Oscar in the best cinematographer category for the film Lion, which was directed by Garth Davis and starred Dev Patel, David Wenham and Nicole Kidman. 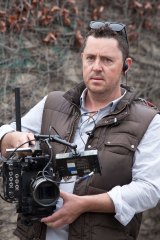 More recently, Fraser is in post-production on the remake of Dune, and is also filming comic book reboot The Batman. Production on The Batman, which is filming in the UK, is currently on hold.

The win for The Mandalorian was part of what looks like a broad sweep of the Creative Arts Emmys, which are held prior to this weekend's "primetime" Emmy awards.

The Mandalorian went into this year's Emmy season with a total of 15 nominations, including a nomination for best drama series, which will be announced on Monday, Australian time.

But in the Creative Arts categories, held over several nights prior to the main telecast, the series has already scooped wins for special visual effects, sound editing, sound mixing and production design in addition to Fraser and Idoine's win in the cinematography category.

The 72nd annual primetime Emmy awards will air on Monday, September 21 from 10am on Fox Arena and will stream via Foxtel.

Most Viewed in Culture