Netflix’s follow-up to the hit The Haunting of Hill House, The Haunting of Bly Manor, is the second in the anthology series. Loosely based on the 1898 novella, The Turn of the Screw, it recounts the story of an American au pair in London, Dani Clayton. Dani is hired to look after Flora and Miles Wingrave, whose lives are haunted by ghosts, both physical and psychological. But fans might notice other supernatural connections, like The Haunting Of Bly Manor‘s Christie Burke, whose role as The Bride has ties to this past and another past series. Warning: Spoilers for The Haunting of Bly Manor follow.

When The Haunting of Bly Manor opens, it is 2007, and the Narrator is at the rehearsal dinner for an upcoming wedding. As she gazes at the Bride seated upfront, she begins to regale us with Dani’s story and how she took over the au pair position after the household’s previous nanny, Rebecca Jessel, committed suicide.

Much of Bly Manor comes down to Dani watching over her younger charge, Flora, and Flora returning the favor by protecting Dani. The ghost is known as Lady in the Lake, who Dani learns was Viola, the manor’s mistress. Viola’s sister, Perdita, murdered her sister and stole her husband, her daughter Isabel, and her rightful place. But she’s unaware Viola refused last rights, and her ghost trapped within a chest of clothes and jewelry bequeathed to her daughter. Eventually, the chest winds up in the lake in an attempt to banish Viola’s ghost.

When Viola attacks Dani, Flora saves her. But Viola, driven by the urge to find her daughter, attempts to take Flora instead. Dani rescues Flora by letting Viola possess her, releasing the ghost from this Earth. But in doing so, she becomes unstable. When Dani wakes one night to find herself trying to murder her wife, Jamie, she drowns herself and becomes the new Lady in the Lake. 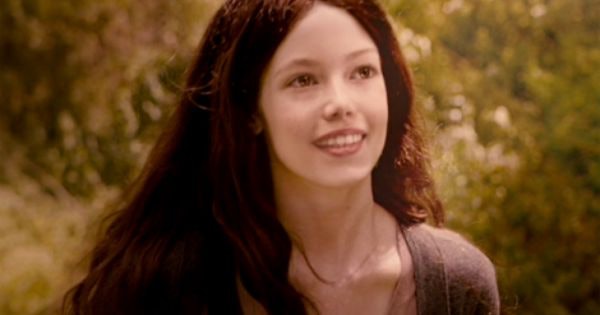 In the series finale, the Narrator, Jamie, reveals a now-grown up Flora is the Bride. Neither she nor her brother remembers the Lady in the Lake, holding only happy memories of Dani. Jamie is there both to see Flora settled and Dani’s ghost once more.

But for those with eagle eyes, the Bride will look familiar. The actress, Christie Burke, is famous for another role in a supernatural tale: Twilight: Breaking Dawn Part 2. She’s the teen Renesmee Carlie Cullen, daughter of Bella and Edward, and most remembered for becoming the imprintee of Jacob.

In most of the film, Renesmee is played by Mackenzie Foy as a young child, too young to marry Jacob or be imprinted by him. But as the film draws to a close, fans see Burke’s older Renesmee, now married to Jacob, and facing a happy future, not unlike Flora in The Haunting of Bly Manor.