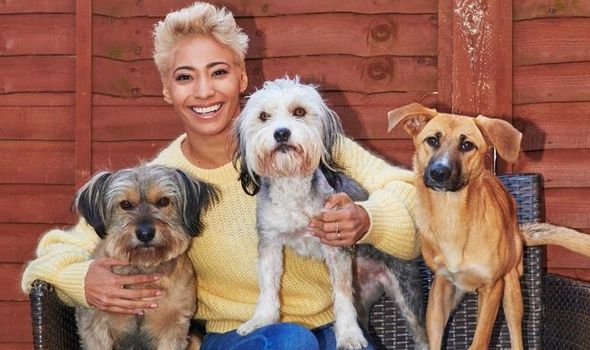 Never has the bond between people and their pooches been stronger than during the last few months of Covid-19 and lockdown. And animal lovers across the globe will be celebrating this special bond on August 26 – International Dog Day. The day recognises all dogs, whether family pets, service animals or those waiting for a home, and you can help by making a donation to a local dog charity. Here, Pam Francis talks to three celebrity owners about the roles dogs play in their lives. 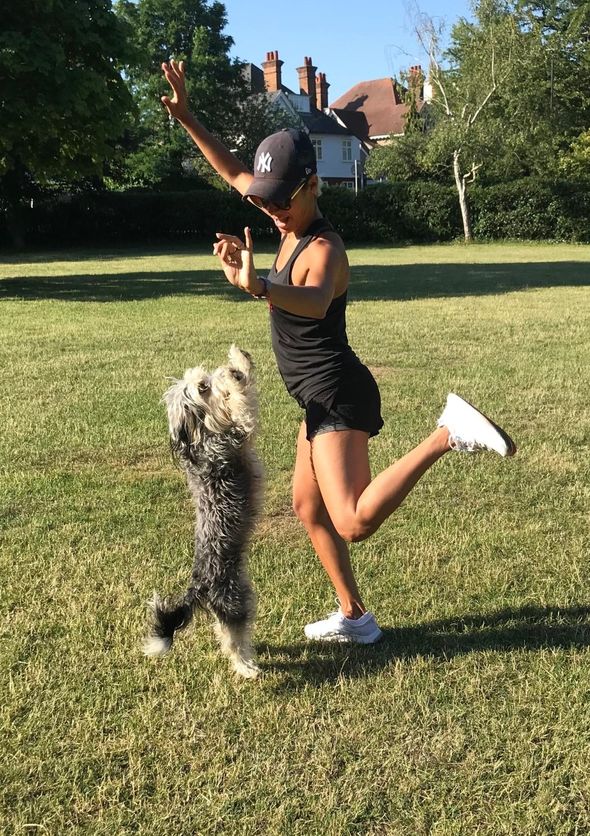 Karen Hauer, 38, professional Latin dance specialist on Strictly lives in London with her partner, David, and their three rescue dogs, Betty (below, middle), Marley (right) and Phoebe (left). She says…

“I grew up in Venezuela surrounded by animals. My mum had four pedigree Dobermanns, as well as cats and parakeets. Moving to New York, I was never able to have a dog because we lived in a very small space. So when I moved to London to start my career, I always had in the back of my mind I would have a dog.

I first saw a picture of Betty on the website of the Wild at Heart Foundation, who fund and support global dog rescue. She had been abandoned and was living on the streets of Bosnia. She looked so sad, with matted fur and cement on her skin. It was absolutely heartbreaking.

I wasn’t in a very good place myself, so I didn’t think twice about adopting her, and so after the medical attention she needed and puppy passport, she came into my life at the end of 2017.

At first she was very quiet and shy, but after four years she has grown into herself. She is feisty and the queen of the house. So lovable and kind. She knows if I am not myself, and comes up to me. And I know she is listening and feels the real me.

Marley, who is three now, is from Greece. Two years ago when I was away doing Strictly, David sent me a photo of him, also from Wild at Heart. He had been left in a cardboard box with a litter of puppies on the side of an airport.

As soon as I saw this tiny fluff bag we reserved him and within a couple of weeks we had this little bundle of joy. He loves sitting on your lap and cuddling and has brought the extra happiness into the house.

Then six months ago, once again I was away working on Strictly, and I saw a video of Phoebe on Instagram. She is also from Greece and had got run over by a car and left for dead. Someone took her to the vet and they were going to put her down because no one had the money to save her. But Wild at Heart jumped in and paid for the operation to have her leg amputated.

I texted David and said I just saw a dog we have to have. He said, me too, and texted me her name was Phoebe.

I had just filmed the Halloween special, dancing with Chris Ramsey, and was so excited to collect her the next day. I just remember seeing this little bag of skin with the most beautiful eyes.

At first David had to buy a backpack to carry her to the park and then let her down until she could start building her strength. She is a year old now and has grown into the toughest dog, very loud and very courageous. The vet had called her Phoebe the fighter – and I can see why.

I have no objection adopting dogs from the UK. But I feel like coming from Venezuela there is no real regard for animal welfare in some countries. You see dogs wandering around being abused.

Here there are laws to protect animals. It’s about educating and bringing more awareness to the welfare of dogs in these other countries. The horrifying stories I see breaks my heart.

When you are bringing an animal into your life you don’t know what has happened to them. I feel like these dogs found me.

They have taught me patience and unconditional love. It’s incredible how grateful they are – and how grateful I am to have them. Some theatres are animal friendly, so if I can take all three of them on tour with me next year I definitely will.”

Karen will be appearing in FIREDANCE from next March. For information and tickets, see firedancelive.co.uk. 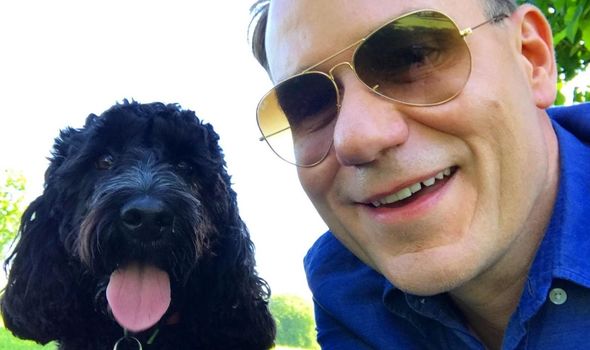 TV presenter Richard Arnold, 50, lives in London with his partner Stuart and cockapoo Clemmie. He says…

“I have never, ever had a pet. But I’d been thinking about it for a while and when my other half and I moved house, it seemed like the right time. I thought a dog would make our house a home.

I had a vision of me owning corgis and pictured myself walking down the steps of the house like the Queen with the pooches following me. But we have young godchildren,  so we needed a breed which was friendly.

I’d encountered cockapoos and I love their energy, plus they are intelligent and seemed like the natural choice.

We found a breeder in Lancashire and I remember sitting on the linoleum floor of the farmhouse when this wee pup with a white triangle on her nose came teetering out of the litter. She crept up my arm and into my neck and I thought, ‘Oh, this is the one.’

Having her is life changing for me.

My other half warned me I was setting myself up for my heart being stolen – and he was bang on.

She was born on April 21, the same day as the Queen, and she is named Clemmie after Winston Churchill’s wife, which I imagined would be the perfect name for a long-suffering companion – thinking she would have her work cut out with me.

She’s five now, and is the love of my life.

She has become a bit of a star in her own right, coming to work at Good Morning Britain with me since she was a puppy. She’s met so many celebrities, including Renée Zellweger, who adored her, and had selfies with everyone, including Gary Barlow, Lulu and Michael Bolton.

Dogs are great levellers and I think some behave better around animals than they do around people.

We get all sorts of people with extraordinary stories coming through the door of Good Morning Britain. Some of their stories are heartbreaking and Clemmie can be quite a comfort.

When my father passed away four years ago, she was a massive comfort to my mum, who moved in with us for a while.

Clemmie slept with her the whole time and didn’t leave her side. Now, whenever Clemmie goes to my mum’s house, she sits in Dad’s chair.

And if Mum sheds a tear, she will go over to the sofa, put her paw on Mum’s shoulder and lick her face. Overall, she is so good for my wellbeing. She’s been a lifeline for me during lockdown.

Dogs are a tremendous boost for mental health without a doubt. As Clemmie has grown, she’s become quite leggy.

She would start off on our bed, all curled up and nuzzling gently. I would wake in the morning and she’d be in full stretch with me on the edge of the bed. It was like sleeping with a small pony, so we’ve had to invest in a super king-size.

She has her own spot on the sofa, which is the premium place for viewing TV, and I think she has more than a sneaking suspicion that she rules the roost.”

Watch Richard on Good Morning Britain, weekdays from 6am to 9am, on ITV. 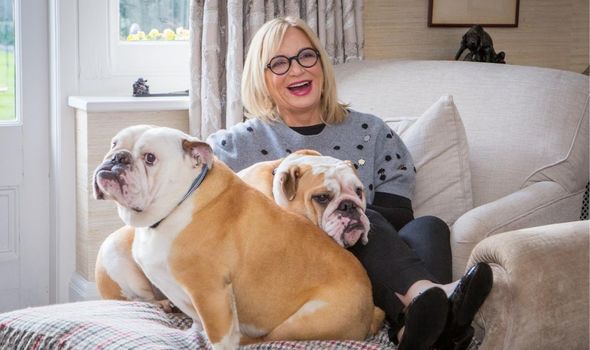 Psychic Sally Morgan, 68, lives in Surrey with her husband John and bulldogs Nellie and Ted. She says…

“I had three bulldogs but in October last year I lost Albert, who had a heart attack, and then Martha this March, also with a heart attack. They were nine-year-old twins.

Now that my grown-up children have left home these dogs are our babies and I was devastated.

During lockdown I heard about Ted, who is a pocket American Bully. He and his brother were handed into a charity called The Edward Foundation, because they were abused.

His brother is on a walking frame and Ted has a condition a bit like Parkinson’s, so his head shakes.

The minute I met him, I knew he was my dog and I think he knew. Bulldogs don’t normally have tails, but he does, and he talks to us by wagging it. He loves Nellie, who thinks he is her puppy, and has settled into his new life.

I chose bulldogs because I’m often away on tour and I wanted a breed that didn’t need a lot of exercise. Bulldogs will sleep 20 hours a day if you let them.

It’s been lovely spending time with them in lockdown.

Instead of being on stage in front of hundreds of people, I’m doing readings from my kitchen when people can watch online as though I’m on a ‘virtual’ tour.

I’m lucky where I live. Nellie and Ted have their own little room with a shower, washing machine and their beds.

We have an acre of garden and every evening before bed I walk them in the orchard and we’ve a dog walker who takes them for walks into the fields.

They have a lovely life now.

Dogs have a sixth sense and teach us to communicate without language. They definitely have spirits. Years ago we had a Jack Russell called Holly, who was run over and killed by a car.

Every morning she used to jump on my bed and the morning after the accident she was there, looking at me.

I said, Holly, and put my hand on her. It went straight through and she just melted and disappeared.

I cannot live without a dog. My dogs support me. I look at Ted and he has human eyes and he knows that I love him.

I would give my life for him. Bulldogs are quite high maintenance. Only get one if you have excellent insurance.

Dogs are proper companions. I love the thought of them relying on me. And they are also really handy.

These days I don’t want to be at a party all night. So when we go out I’ll say, ‘I have to go because of the dogs.’ They’re a wonderful excuse.”

Which of the Disney Princesses Would the BTS Members Be?

Why Stephanie Beatriz Got Emotional While Filming 'In the Heights'